For the last year, Marvel fans have been left high and dry. After the rollercoaster of Avengers: Infinity War’and Avengers: Endgame, Marvel fanatics were pumped for Phase Four of the Marvel Cinematic Universe to kick-off, prepping their Marvel t-shirts and Marvel socks to represent their favourite characters. Sadly, COVID-19 had other plans, and the world was left without any new Marvel content for 12 very long months. During that time, fans were clinging to collectibles and Spider-Man socks while release dates kept being pushed back. 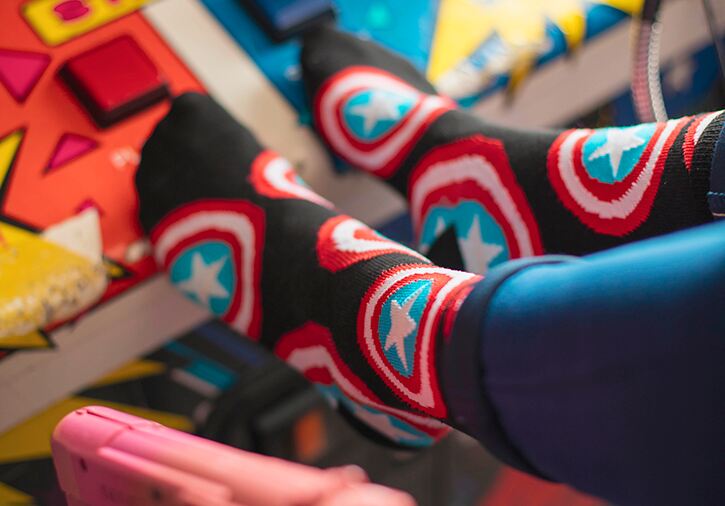 In January 2021, the Marvel fast was broken by the spectacular WandaVision, focusing on the grief of Wanda Maximoff in the wake of Avengers: Endgame. This was the first original Marvel TV show to stream directly to Disney+, and it quickly became the biggest TV show in the world. Finishing on 5 March, ‘WandaVision’ set the stage for Marvel’s latest TV show - The Falcon and The Winter Soldier, ready for its launch on Friday 19th March.

Who are The Falcon and The Winter Soldier

Every superhero likes to have an alias, and the stars of the latest Marvel project are no different. The Falcon refers to Sam Wilson (portrayed by Anthony Mackie), and The Winter Soldier is Bucky Barnes (portrayed by Sebastian Stan). Both were key players throughout previous Avengers adventures and were the closest friends of Captain America.

Fans first met Sam Wilson, and his alter ego Falcon, in the second Captain America instalment: Captain America: The Winter Soldier. which opens with Cap (portrayed by Chris Evans) realising that he’s been frozen in the ice for 66 long years after he sacrificed himself for the world in 1945. When he’s found in 2011, he’s feeling pretty lost and confused given that most of the people he knows are dead and the internet dominates the planet.

Captain America - or Steve Rogers - had a military background. When he met fellow ex-veteran Sam Wilson on his jogs, he found a friend for life. Before meeting Steve, Sam Wilson was testing aerial combat technology under the codename ‘Falcon’. Sadly his partner died during testing, so Sam left the military services and hung up his wings. That is, until he met Captain America. Thus, Falcon was reborn.

James Buchanan "Bucky" Barnes has had an incredibly complex and difficult life. First appearing in Captain America: The First Avenger, fans were introduced to Bucky as a carefree, charismatic young man who is signing up for the armed forces ready to fight in WW2. During this film, Bucky is captured, experimented on and rescued before plummeting to his death from a train.

Except, he didn’t die! The experimentations on Bucky during his captivity led to him developing super-human strength which meant he survived the fall with just the loss of his left arm. He was recaptured by HYDRA, the classic Marvel villains, who wiped his memories and transformed him into a human weapon who became an infamous assassin - The Winter Soldier.

Throughout Captain America: The Winter Soldier and Captain America: Civil War, Steve learns that Bucky is still alive, and endeavours to rescue his best friend from his captors, and himself. It takes a LONG time, and a retreat to Wakanda, but eventually Bucky regains his memories and control of his powers.

So what’s The Falcon and The Winter Soldier about?

At the end of Avengers: Endgame, Captain America gave up his famous shield, passing the mantle over to Sam. Initial trailers and promotion for The Falcon and The Winter Soldier show Sam and Bucky working as a dynamic duo to save the world from its latest villain.

Trailers suggest the return of Captain America: Civil War villain, Helmut Zemo, which makes sense given that he was the villain who tried to reactivate Bucky’s programme to kill. We have a feeling that Bucky may be out to get his revenge this time around!

Many fans are wondering if we will get an insight into the fate of Captain America, as promo scenes suggest a possible funeral. This Disney Plus show allows Falcon and The Winter Soldier to shine on their own.

For most of the previous Marvel movies, it’s arguable that they lived in the shadow of Steve Rogers, so the show indicates that both characters are finally getting a chance to escape the curse of the ‘supporting best friend’ role that they comfortably fell into during the Avengers movies.

We’re certain we can expect epic battle scenes, plenty of sarcastic comments, and the brilliant plot lines we’ve come to love, and expect, from Marvel Studios.

Episodes are releasing weekly on Disney+, every Friday until 23rd April. We don’t know about you but we’ll be using this as an excuse to sport a different pair of Marvel Socks each week!

Join the fun and shop our Marvel range!


If you want to join us, shop our Marvel socks range now, and support the cause with our Captain America designs. If you’re looking ahead to the future, buy our Loki Marvel socks ready for Loki’s Disney+ TV series launching in May.