Thor and Loki are arguably the most iconic sibling duo in the Marvel Cinematic Universe (MCU). For the last ten years, the God of Thunder and the God of Mischief have flipped between brotherly love and arch enemies, but through all of this one thing is certain: these brothers sure know how to make the audience laugh. So to celebrate the original Loki series coming to Disney+ in June, we’re sharing our Top 5 funniest Thor and Loki moments (and wearing our favourite Marvel socks of course!). 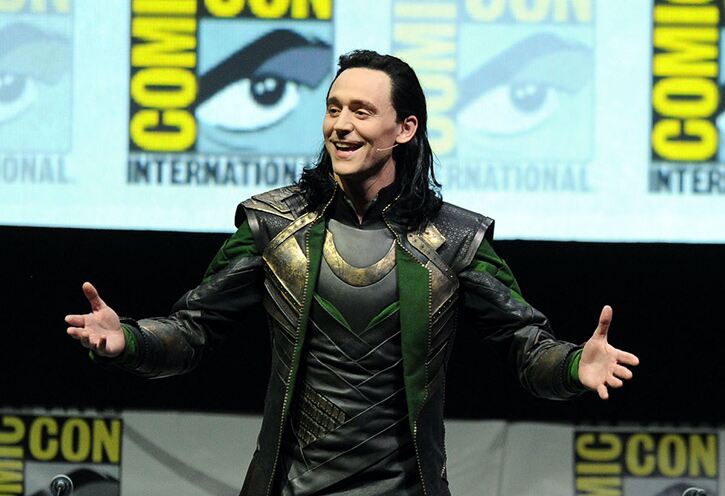 You’ll probably see Thor Ragnarok featured several times on this list because of its incredibly witty script which appeared in stark contrast to the previous two instalments of the Thor franchise.

When Thor is presented as a prisoner to Sakaar’s Grand Master, he thinks all of his problems are sorted when he spots Loki in the nearby crowds. Despite Thor’s best efforts, Loki refuses to acknowledge his brother, insisting that he has no idea who he is before admitting reluctantly that they’re adopted.

This Thor and Loki moment always elicits a giggle because the ‘adopted’ quip becomes a running joke across the MCU when either Thor or Loki are embarrassed by the actions of the other.

In the early scenes of Thor Ragnarok, Thor and Loki are searching for their father, Odin, after Loki banished him to Earth.

Whilst they stand in New York City looking upon the construction site that used to be their father’s nursing home, Loki defends his actions by stating ‘How was I supposed to know? I can’t see into the future. I’m not a witch.’

Without missing a beat, Thor responds ‘Then why’d you dress like one?’ in reference to Loki’s iconic all black suit combination. The speed and wit of this response is one of the reasons we love Thor and Loki - just like all siblings, they’ll never miss the opportunity to make a jibe at the other’s expense.

Perhaps it’s just the cameo from Chris Evans that makes this scene so iconic, but we love seeing Loki’s powers in action when he shape shifts in Thor: The Dark World. Let’s hope we get more shapeshifting moments in the new Loki series.

Against his better instincts, Thor frees Loki to help him save his girlfriend Jane from being overrun by an evil magical ether. A casual occurrence in the world of Marvel.

Whilst Thor and Loki are trying to remain conspicuous, the God of Mischief lives up to his name and shifts into several different characters, ending in Captain America whilst making a jibe about Thor’s newfound friendship with the Avengers.

Any sibling will identify with this Thor and Loki scene, with Loki being increasingly irritating to trigger a reaction from his brother whilst Thor tries his best to ignore Loki. That is, until their life depends on Thor keeping Loki quiet. With Loki’s wit, Thor’s dry comebacks and a Marvel cameo, what’s not to love?

Coming in at second place is the unforgettable exchange between Thor and Loki in the Sakaar jail cell. Whilst Loki tries to have a serious conversation, Thor spends the majority of the discussion throwing bottles and cans at Loki to expose his holographic presence.

The comic timing of this scene from both Thor and Loki is tremendous, and what could have become a drag just becomes even funnier as time passses on.

We also love this moment because it sets up a running theme of Thor throwing items at Loki to prove his presence, and sets up the beautiful brotherly scene at the end of the film where Thor and Loki reunite.

For us, the definitive comical moment for Thor and Loki comes during their attempted escape from Sakaar in the third installment of the Thor franchise.

Whilst the brothers calmly travel to the spaceship loading bay in an elevator, they discuss doing ‘Get Help’ as a distraction. Whilst Loki is vehemently against the tactic, Thor seems more than happy to take part, despite it being ‘humiliating’ for Loki.

Despite Loki’s protests, ‘Get Help’ takes place and involves Thor pretending to carry a limp Loki in need of medical assistance before both Asgardians attack their opponents by flinging Loki into the group of Sakaar guards.

We love this moment because it becomes a running joke throughout the film, and illustrates that beneath all of the superpowers and bravado, Thor and Loki are a powerful duo who share a deep brotherly love, no matter how complex it may be.

So there you have it! Our Top 5 funniest moments from Thor and Loki across the last decade. We’re certain there’s more comedy to come in the original Loki series. We can’t wait to get our Loki socks on and laugh along with the God of Mischief (whilst also hoping for a Thor cameo so we can rock Thor and Loki socks together!).